Skip to content
Resources / Recruiting Strategies / How to Hire / Culture-Based Recruiting: How is Your Company Different? 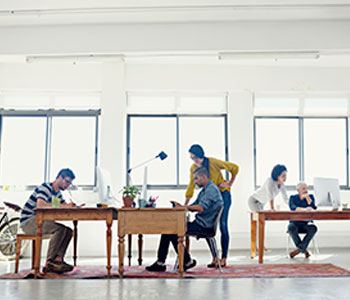 People are more likely to remain in company cultures that support their personal values and professional success.

In terms of candidate sourcing and attraction, the most important aspect of culture is the degree to which common practices and beliefs in your company are perceived as unique and similar to the beliefs and preferences of candidates. For example, some organizations believe financial rewards are more important than other forms of recognition, such as praise from supervisors. One candidate may like this money-based culture, while another may find it impersonal or threatening.

In terms of candidate selection, the most critical aspects of culture are philosophies that employees must support, adapt to or overcome to be effective. Culture can have a major impact on the success of newly hired employees, even those with very similar skills and experiences. For example, certain skills are more critical in consensus-oriented cultures than in cultures where employees are expected to act autonomously. A highly independent employee might succeed in a company that places little emphasis on consensus, but fail miserably in the same job in a company that encourages group decision-making.

Using culture for recruitment requires identifying aspects of your company’s culture that make it different from other companies. In essence, you need to identify the unique beliefs, behaviors and practices of your company.

Conduct a survey. However, surveys are fairly labor intensive and often fail to capture the work environment’s truly unique aspects.

Interview a cross-section of employees and leaders about the work environment. Ask for short phrases that describe the company’s atmosphere, reasons why they like the company and things they find frustrating.

The ideal approach is to use a combination of these methods, although interviews tend to be the most efficient and information rich. But people may be reluctant to speak openly about negative aspects of the company, so you may want to use an independent third party with expertise in organizational culture and employee staffing.

If done correctly, a culture audit should provide five to 10 primary cultural attributes that set your company apart. These themes will probably not be completely positive. However, culture tends to evolve based on a past or current need, and it is usually possible to find ways to word each attribute in a way that highlights its advantages. The following are good and bad aspects of some common cultural attributes:

Once you’ve identified your company’s primary cultural attributes, create a subset to incorporate into your recruiting strategy. Look for attributes that:

Although it is preferable to hire people who fit the culture, there are times when this is less important. When your goal is to recruit someone to perform a specific task for a set amount of time, culture may not be critical. Culture is also less important when people will be working in an environment that is relatively isolated from the rest of the company. In these cases, focus on the local culture created by the team the person will work with. However, avoid establishing multiple, conflicting cultures within your company.