By Karin Eldor, a Xennial herself.

Say hello to the newest demographic in town: “Xennials.”

What is a Xennial?

In May 2017, a new segment was uncovered and I, for one, am grateful for it. (I’ve always felt too old to be millennial but too young to be part of Generation X — and apparently I’m not alone!)

According to the HuffPost, xennial is “the new term being used to describe people born between 1977 and 1983. Like the pessimistic Gen Xers before them, this microgeneration is not as tech savvy as the millennials who are considered digital natives.”

The term “xennial” and its characteristics were coined by Dan Woodman, Associate Professor of Sociology at The University of Melbourne. 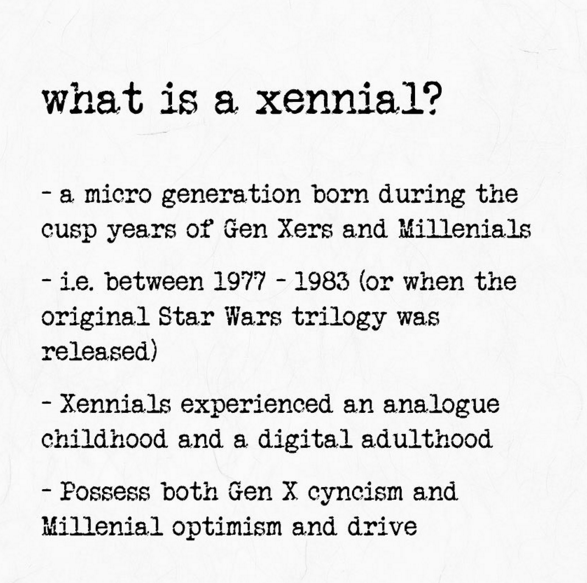 Find out why the unique generation that straddles both millennials and Generation X is such a key player in the workforce.

We spoke with two experts to help explain why “x” marks the spot when it comes to xennials:

1- They get stuff done — and they deliver.

Kim Mackenzie, Principal at Ripley Strategy, focused on xennials in a recent project, and she and her team noticed the generation’s strong convictions and unbelievable ability to follow through.  “Xennials have the idealism of millennials but the realism and ‘Get Stuff Done’ attitude of Gen Xers. When they say something matters to them they follow through and deliver.”

2- They are entrepreneurial and take ownership.

Carrie Skowronski, Chief Growth Officer and Coach at Leadology, and Gallup-certified Strengths Coach, weighs in: “Millennials are educated, resourceful and they care about the ‘Why.’”

Now, I know we’re describing xennials here, but they do take on qualities of their (slightly younger) millennial cohorts.

Skowronski explains: “Gallup’s research showed that it’s not enough (for millennials) to simply get a consistent paycheck.  They care about purpose.  Can you imagine?  Highly educated, resourceful, AND they care about feeling connected to the greater mission of the organization?  If companies can leverage this, they will inspire some of the most actively engaged workers who are catapulted to a place of buy-in and activated towards making profound contributions to the collective goals.”

Xennials and millennials love to feel a sense of pride in what they’re doing; they’re not driven by salary alone.

What else does this mean to companies? That they shouldn’t be wary of employees who are entrepreneurial. While yes, it can mean that they might eventually pursue their own projects and go freelance, it also means that they feel accountable for their work and take ownership in it. They don’t see their jobs as “punch in, punch out” or 9 to 5; they live and breathe their work.

3- They are nimble, agile and adapt to change easily.

Skowronski continues: “While (xennials and older millennials) can recall life without wifi, they were early adopters to all the new technologies that we use today.  They have a variety of information at their fingertips from a multitude of resources (on and off the web), they are fast to retrieve it, and this makes them incredible multitaskers.”

“They remember life pre-wifi, pre-9/11, pre-smartphones, etc.  They’ve had no choice but to be nimble and flexible to change.” – Carrie Skowronski

4- They have the best of all worlds.

The amazing thing about xennials is that they’ve learned from their Gen Xer predecessors and are also young enough to be digitally savvy like millennials.

Mackenzie explains: “Xennials have the terrific combination of appreciation of publishing/physical media objects and a natural strong digital knowhow, as the Internet came along while they were in their early teens.”

“Xennials on the job hunt should highlight their ‘bridge’ status between generations and ability to bring experience, process and maturity into the room.” Kim Mackenzie

Another major trait is that xennials are closer in proximity to Generation Xers and many of them might even have Baby Boomer parents. “So from a values perspective, they are far more understanding and relatable than we often give them credit for,” according to Skowronski.

So job seekers, take note: these are soft skills that can make a powerful impact on your resume, so make sure to point these out!

This new generational segment might be small, but it’s a particularly special and unique one. There are so many studies and articles about millennials, so it’s refreshing to know that xennials are no longer being clumped together as merely older millennials or younger Generation Xers.

And knowing how to market yourself as a xennial and leverage your unique “bridge” status is a powerful thing to own!

Knowing what makes Xennials and members of other generational groups tick is a great way to manage and motivate your staff, but it’s also important to remember that people don’t always fit neatly into a box. Find your next great new hire, regardless of which generation they identify with, by posting a free job ad at Monster today.

Thank you to Kim Mackenzie, Principal at Ripley Strategy, and Carrie Skowronski, Chief Growth Officer and Coach at Leadology, for their insights on this topic.