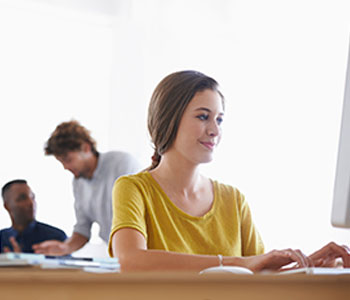 Get with the zeitgeist, interviewers. Don’t just settle for local candidates anymore. And rid yourself of the standard resume’s one dimensional limits.

The age of interviewing wherever, whenever – via Webcam – has arrived.

Now instead of flying top talent in from Yellowknife (or Timbuktu, for that matter, the latter residing in the African nation of Mali according to my trusty Wikipedia), you can instead reduce your carbon footprint, save travel costs and reach a wider audience, simply by imitating Norman Jewison or Quentin Tarantino.
Techno-Interviewing

Interview On Demand, LLC. launched their new product, Interview on Demand Video Interview., back in early 2008. Their press release stated that “…we can now see and hear candidates, anywhere, anytime via secure Internet application hosted on the Interview on Demand video servers.” The candidate gets a webcam by courier and you, the interviewer, conduct the proceedings on your PC.

Other firms have entered this hitherto untapped HR space as well. InterviewStream, LiveHire, and my personal fave, GreenJobInterview (appeals to the environmentalist aesthetic). Good thing competitors are popping up like trailers for the latest horror flick on your TV, since Interview On Demand seems to have tanked after receiving thumbs down from critics. The remaining players all provide the non-technical interviewer with video toys galore.

Picture the joys of trying to detect phonies and liars when they’re 1000 kilometres away, in front of you solely as a projected image on your video monitor. Think it’s tough looking for “tells” like twitches, soaked armpits and subtle facial expressions even when the candidate’s physically seated right there on the other side of your desk? Good luck sussing out the truth via satellite feed.

Through a video camera, darkly

Good thing you have me to clue you in on what to watch for, so you don’t get taken in by pre-recorded pretenders. Here are five sure signs that the candidate you’re interviewing from afar may not be the real deal:

# 5. She looks suspiciously like Angelina Jolie. Only her lips don’t move when she’s answering, and you could swear you’ve seen this image as a cardboard display at your local movie theatre.

# 4. He claims to have a degrees from Harvard and Oxford, but when you ask him why he considers himself the best candidate for your job, all he can do is smile broadly, roll his eyes, and say “Dude, like isn’t it obvious by now?” There is a mysterious, hazy smoke in the background. Suddenly he begins to lick the Webcam lens.

# 3. She is telling you why her attention to detail and superior organizing skills are so outstanding when Mom appears in the background, slamming open the door shouting “Clean up your room, you slob!”

# 2. He forgets that you can see his every move and begins to mimic you, contorting his face like a mime being shocked with high voltage every time you ask a question.

# 1. She begins belting out songs from the movie “Rent” and repeatedly asks you if you’re ready for her close up, Mr. DeMille.
The Camera Never Lies – But People Do

Webcams and video conferencing facilities give a very different view of a job applicant than traditional resumes or phone calls. It’s almost as good as the real thing. You can watch a candidate sweat under the glare of klieg lights; blush when you ask overtly personal questions, and run for the door at record speed when you reveal the starting salary you had in mind.

But there really is no substitute for face-to-face. In the end you want to press the flesh and see the glint in their eyes when you tell them they’re invited back for the next round of interviews. Only this time tell ‘em it’ll be simulcast on pay-per-view TV as the new reality show for the unemployed, “Canadian Idle.”