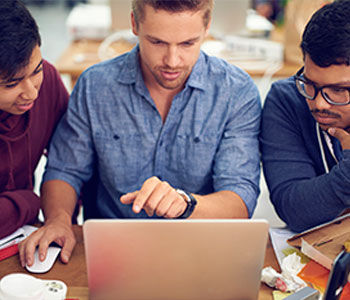 By Mark Swartz
Canadian Workplace Specialist
You’ve asked the question twice now. But the pleasant young woman you’re interviewing sits there timidly. “Tell me about an achievement at work you are exceptionally proud of,” you repeat with a sigh. She adjusts her black hijab (head scarf) nervously, but still stares silently at the floor.
Should you wait patiently and see what happens next? After all, she does come highly recommended. And her resume was one of the most qualified.
Or do you swiftly give in to your frustration, labelling this candidate “too foreign”?
Make Snap Judgments At Your Own Peril
The interviewee above is a recent Middle Eastern immigrant. She has an excellent track record. Her skills far exceed the required levels you’re hiring for. What an asset she could be.
But why is she so darned hesitant to brag about herself? Your other candidates have been boasting till your ears nearly burst. Hmmm, maybe there’s something you’ve overlooked.
Like, could it be her culture may discourage her from speaking in praise of herself? As a woman, she may feel it’s unacceptable to be “exceptionally proud” about even her greatest accomplishments.
The language you’ve used in your question has accidentally shut her down. You could lose her for good unless you can draw her out. Might you have handled the situation differently?
Create A “Cultural Diversity Friendly” Interview Environment
Help make culture-differenced candidates feel welcome from the moment they step into your premises. If you have a reception area, displaying some inexpensive art from various nations and ethnicities can be a visible sign of your openness.
So too can putting up pictures of your employees if they reflect Canada’s mosaic. Little plaques lined up with Employee Of The Month names are also great (so long as at least some of the names are culturally unique).
Don’t Judge A Book By Its Cover
You can turn a candidate off by acting surprised when you see them in person for the first time, as if you were expecting someone not so (or more)…ethnic.
This can happen when you’ve conducted an initial phone screening. If the interviewee sounded local, and their name didn’t give them away, you might inadvertently marvel that they’re Asian or a person of colour.
A similar error can occur when the applicant’s name is definitely “foreign sounding.” Could be their facial features or skin tone are “ethnic” as well. Will you make the mistake of complimenting them on how well they speak English or French, though they might in fact be third generation Canadian?
Be Patient
Language difficulties and quirky, culturally specific behaviours can lead you to false conclusions. Newcomers to our country must only know our official languages well enough to pass basic tests. They may not have their “workplace vocabulary” down pat yet.
Try not to jump all over the candidate if they mispronounce some words or use the wrong expression here and there. There are English idioms and la joile (slang) in French that can take years to learn.
Having trouble with their heavy accent? Pay a little more attention to what the person is actually saying. Should they be at a loss for words, offer some optional phrases they can choose from. You could also ask the interviewee to repeat their response, or rephrase it. Conversely, say your questions again if asked to do so.
Demonstrate Your Company’s Commitment To Cultural Equality
Would you like to make your culturally diverse interviewees more at home? Then let them know of anything your company does to accommodate their needs.
Talk about any multi-cultural events you hold or take part in. Describe how you respect holidays of all ethnicities and religions. And if you donate to related causes, bring this up in conversation.
But avoid putting the candidate on the spot by singling them out. If you talk about cultural or ethnic matters, you might want to be general and casual about it. The point is to portray your firm as broad-minded. Tread lightly: if you think telling a South American that you serve chilli and tacos on Fridays will thrill them, you could be sorely mistaken. Do they now feel marginalized, that you don’t just seem them as “one of us”?
Put A Blindfold On When Choosing The Best Candidate
We all carry around some prejudice. You can’t live in a diverse society without hearing ethnic jokes and stereotypes tossed around now and again.
Are you immune to this? That would be nice. But next time a Muslim sits across from you at interview time, are you sure you’re not just the tiniest bit concerned they might be a secret terrorist? Or does an Israeli just arrived make you think that he and his country’s policies sometimes infuriate the international community?
Look, let’s be real. We are prone to bias based on what we hear, assume, and choose to believe. But if a candidate is measured on merit first, cultural background and your possible bigotries second, you can get the best employees the world has to offer. Even if this concept is still somewhat foreign to you.